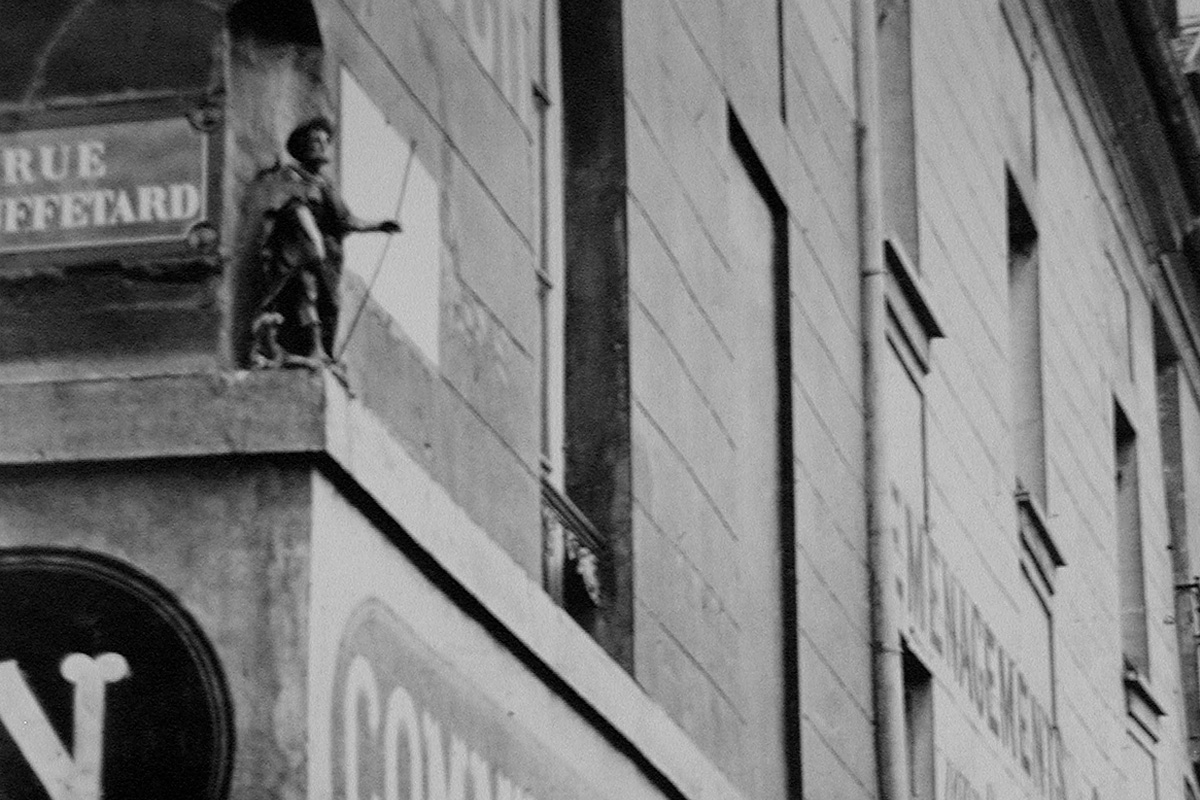 Signs & Painting: from the Picture to the Letter

In Paris, the use of putting up pictorial signs in the streets emerged in the 14th century. These signs could designate streets as well as particular houses. Often these signs were three-dimensional [Fig. 1] and showed figures of saints. When painted, they used to be executed on wooden boards and put on the wall beside the entrance. Later on, these signs shifted from the house to the commercial establishment that was located in the given house. As the sidewalks of the streets were normally covered by wooden porches, these signs could not be seen easily. To make them visible, traders began to hang up their signs on long bars over the streets and passersby. The signboard was born. 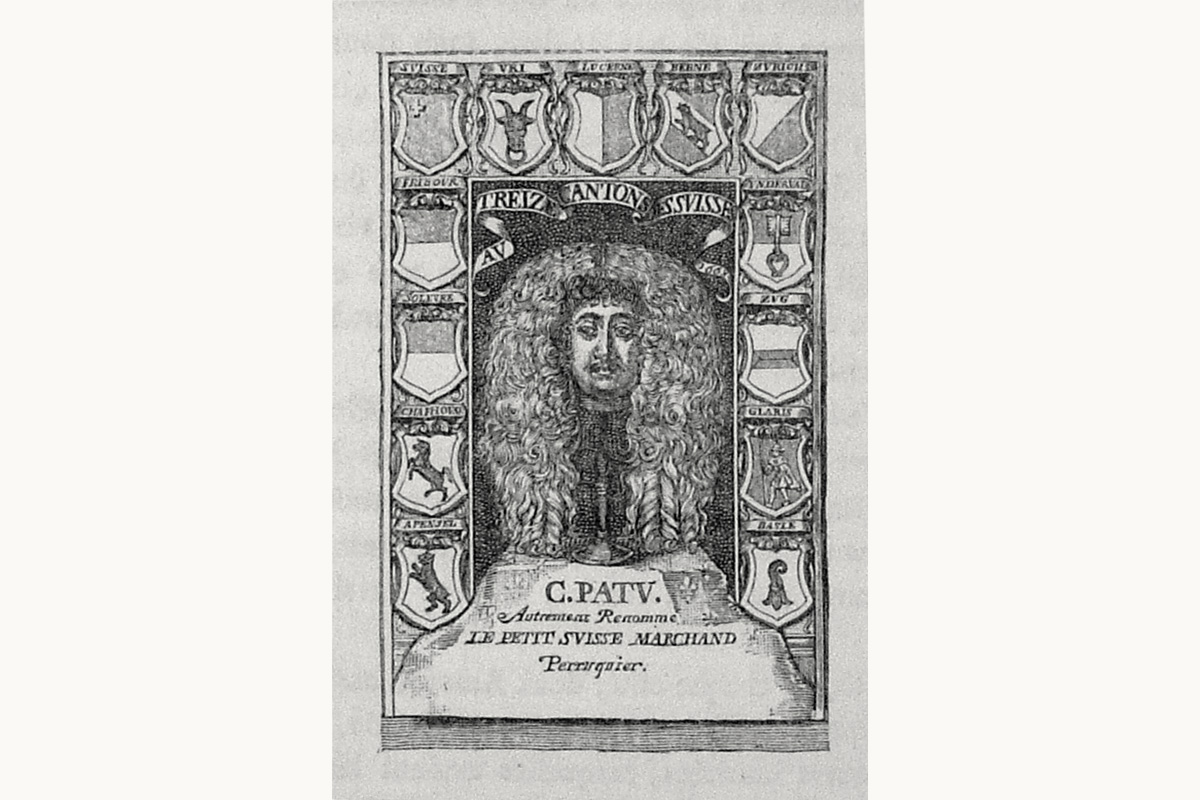 In the 18th century, the culture of signs entered the world of print: copperplate engravers did so-called “enseignes-adresses” [Fig. 2], which is the early form of printed advertisement. These handbills usually show the (pictorial) sign of the given establishment as well as information on where to find them. As most of the wooden signs have been lost over the centuries, these handbills nowadays represent a major source for researching the history of signs.

Signboards grew bigger and bigger: “Those signboards were hanging on long iron bars in a way that, on windy days, signs and bars threatened passersby in the streets with being clobbered over the head. When the wind was blowing, the jarring signs bounced and collided against each other, giving a dissonant chime. Furthermore, they cast clouds over the scarce light of the lanterns. Most of them were three-dimensional and of thundering volume. They looked like a giant people, the most crippled people of Europe. One could see a six-foot-high handle of an epee, a boot as big as a bushel, a spur as big as a cartwheel, a glove in which one could accommodate a child of three years in each of the fingers, monstrous heads, and arms brandishing florets dotting the entire length of the street.” 1 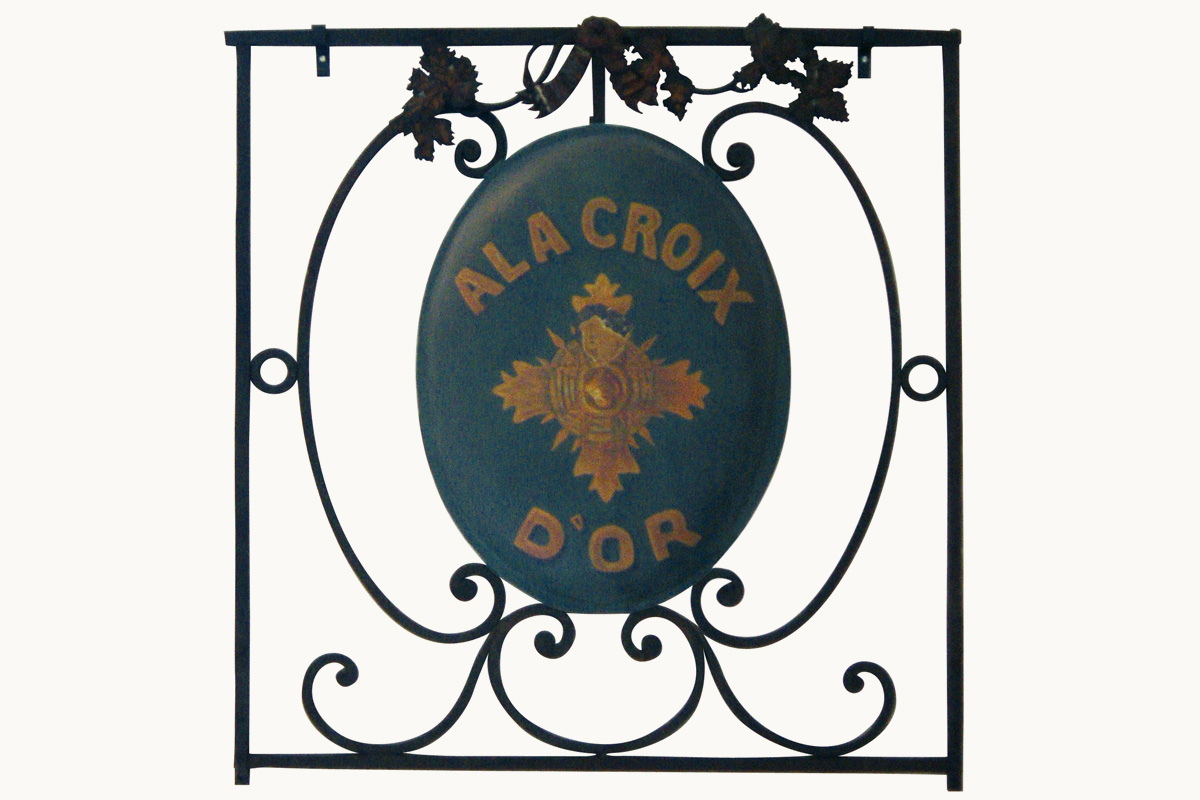 These words may seem exaggerated to us today, but accidents caused by dropping signboards were real then. In London, four people were killed in such an accident in 1718. As a result, signboards were forbidden in 1761 in Paris by the local police. From then on, all signs had to be put flat against the wall, as seen in figure 3.

Diffusion of letters into space 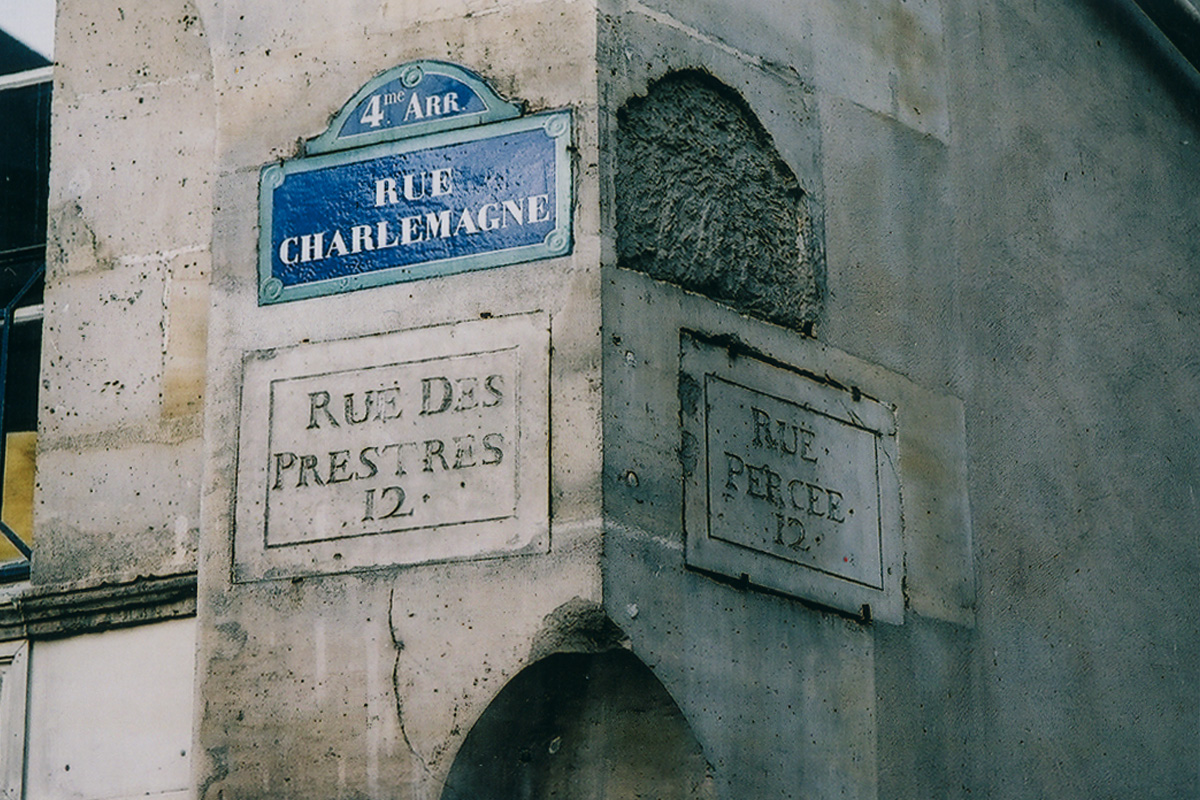 The first systematic introduction of letter signs into Parisian public space took place in 1728. According to the local police, all names of streets (which could change occasionally) were fixed and all houses were numbered, the numbers running up one side of the street and down the other. The first street signs were made of painted tin plate: “Those names were painted in black uppercase letters on white tin plates cut to equal size and fixed on the corners at every first and last house of each street and lane. The numbers were also painted above the house entrances in white paint on a blue or red field.” 2

The inhabitants of Paris first rejected this measure, especially when they disliked the name officially given to the street. But, by 1750, street signs were widely accepted, and people began to fix plates on the crossings between the ends of the streets themselves.

The next step in the diffusion of letters into space was taken in tandem with the rise of industrial production and citizen’s mobility. From 1800 to 1850, the population of Paris doubled to one million people. There was more trade, more shops and more signs. New advertising material was needed. The signs began to move onto the corners of populated streets so as to point out the way deeper into quarters that passersby might otherwise not enter into. This marked the emergence of wall-painted signs, which also started to cover fire walls. A striking phenomenon of the time was the little hand pointing the right way for those who just read the pictorial element of a sign and want to know where to turn.

The development from the shop sign on the shop fascia to the wall-painted advertisement on fire walls all over the city can be divided into three major steps that reflect the economical and social developments that took place over the 19th century. 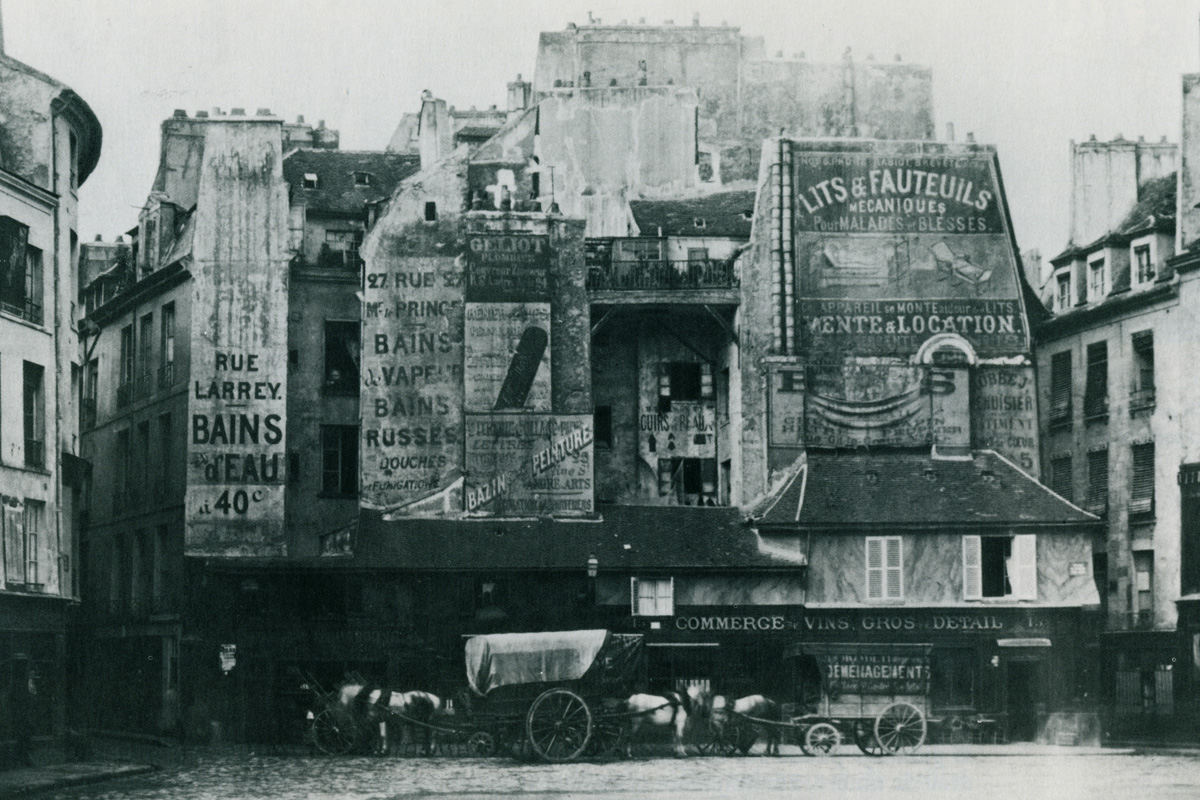 First, owners of little shops started to advertise for themselves on the corners of bigger streets. These painted walls were meant to show the way and bore information similar to that of signs or enseignes-adresse. At the same time, industrialisation, public transport, and the growing wealth of the bourgeois classes favoured the advent of bigger commercial establishments, the so-called “magasins de nouveautés” specialising in textiles and toiletries, the precursors of later 19th-century department stores. Their number grew rapidly, from 16 in 1810 to 400 in 1855. These establishments spread throughout the city and competed for the same clients. 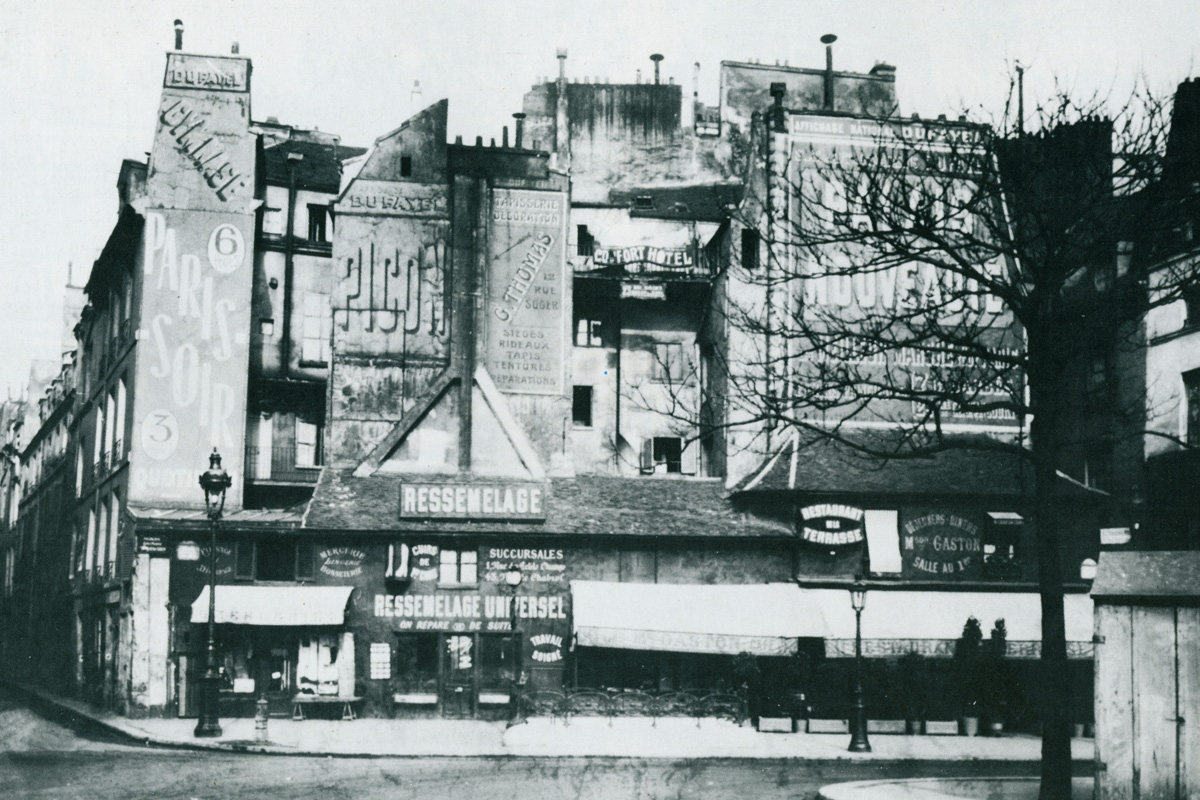 This led, secondly, to painted walls advertising the establishments in all parts of the city. This changed the composition of the content: There was no more interest in displaying a direction. Above all, it was the name of the establishment that had to be announced. Accordingly, letter painting became a big business in the 1840s, when agencies started to sell both interesting “spots” they rented from house owners and the execution of the painting.

In 1884, Édouard Fournier commented on how eagerly the later department stores held on to their names, which sometimes even referred to earlier pictorial signs: “Even when people gave up their signboards, they still held on to the title as if it were the whole reason behind the business, and that title continued to be used as an inscription above the boutique as well as on the invoice sheets and prospectus of the trader. This name sign is a serious piece of property that the trader has the right to defend against imitators. Even the big trading firms that are currently in fashion distinguish themselves by their name signs, which are set in big letters across their storefronts. […] Some of these signs have become fiefdoms that their owners would not trade for a hereditary duchy, if those still existed. In this chart, the novelties merit the laurel wreath : the Louvre, the Bon Marché, the Printemps, etc. fill the world with their names – meaning their signs – and you can be sure that, for a woman, the great historical name of the Louvre no longer evokes the idea of the royal palace or the marvellous museum but, rather, the idea of ‘the biggest store of the world’ !” 3

In the third step, which took place in the second half of 19th century, members of the recently established industry wanted to sell their national brands throughout the country. As the number of “spots” was naturally limited, this led to competition between producers and sellers for the best places to put their ads.

Recapitulation
From the Middle Ages to the end of the 19th century, commercial advertising shifted from pictorial signs to letter signs. Of course, these two elements always coexisted in public spaces, and the preference for either one or the other oscillated constantly over the centuries. Nevertheless, one can see that, from their first systematic introduction into the streets, letters constantly conquered more and more space in the city. By the end of the century, the streets were crowded with letters. What once was singular and outstanding – e.g., on a monument – had become ubiquitous.

The text above is a short extract from my diploma thesis “French Délice — Letter Painting & Lettering & Letter Culture in France”. Find the German version of this text here, and some pictures of the book there. Have a look here for lectures on the subject.